“Reverb Junkies” takes you inside this little known sub-genre of Rock and Roll. This documentary introduces you to some of the people playing the fastest, hottest instrumental music around and to the rabid fans of all ages who are driven to keep the music alive.

“Reverb Junkies” rocks with the rush of a riff, rolls and pushes and pulls like the tides. It’s a fun ride that never ends and always crests. 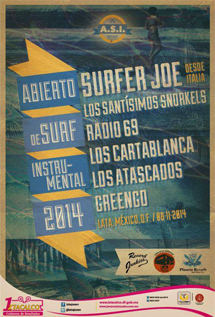 The film was screened on June 21, 2014 at the Surfer Joe Summer Festival in Livorno, Italy.